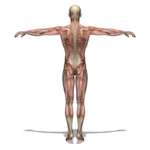 Golfer's elbow, or medial epicondylitis, is the inflammation of the medial epicondyle, a tendon located in the inner side of the elbow. Golf swing is often the cause of this condition, thus the origin of the name.

Golfer’s elbow is a similar but less common condition to tennis elbow, which occurs to the opposite, outer aspect of the elbow. It arises mainly from overuse of the muscles and tendons of the forearm, namely the flexor and pronator muscles (pronator teres and the flexor carpi radialis origins).

These muscles function during forearm pronation and wrist flexion. With a golf swing the forces accumulate in the medial epicondyle tendon when griping the club. A continuous strain placed on these muscles with strenuous, repetitive movements can injure the medial epicondyle tendon creating microtears. It is believed that tendonosis (rather than tendonitis, or inflammation of the tendon), is the problem underlying medial epicondylitis. Tendonosis involves a gradual degeneration of the collagen fibres forming the tendon followed by the accumulation of cells called fibroblasts leading to scar formation, tendon rigidity and increased risk of rupture.

Medial epicondylitis can be associated with ulnar neuropathy as well as changes in the medial collateral ligament. The involvement of the ulnar nerve is seen in approximately 50% of patients with Golfer’s elbow.

Medial epicondylitis is common in individuals between 35 and 55 years of age. Overuse is the main cause of this pathology especially in older people as the tendons become weaker with ageing. It mostly develops with swing movements of the wrist typical of golfing or throwing activity in ball sports, bowling, weight lifting and arching and racquet sports. It can also arise from a wrong posture, when working at a computer desk, driving and DIY activities or sudden trauma.

There are a number of predisposing risk factors for medial epicondylitis:

Poor flexibility of the forearm

Signs of a Golfer’s elbow typically increase gradually and possibly last several weeks or longer. The most common symptoms of Golfer's elbow are:

Pain on the inside edge of the elbow, which can extent to the lower arm when gripping objects

Pain during wrist flexion and pronation

Weakening of the forearm muscles involved in gripping

The clinical presentation is usually the best method for the diagnosis of Golfer's
elbow. The patient’s history of sport or profession involving physical activities posing a risk for this pathology and past injuries will be discussed with the examiner.

Clinical investigation focuses on the characteristics of pain at rest and during elbow activity, tenderness at touch and changes in the range of movement. Ultrasound is often sufficient to detect changes in the structure of the tendon including the presence of tears and swelling.

X-rays are only taken to exclude arthritis to the elbow or other bone-related conditions and visualise calcium deposits in the tendon. MRI is only rarely recommended. Electrodiagnostic studies are undertaken with suspected injury to the ulnar nerve, the median nerve or the medial antebrachial cutaneous nerve.

Conservative treatment is routine in 90-95% patients and symptoms normally improve over 4-6 weeks. However, relapses are common 3 to 4 months later. The following management is standard for treating Golfer's elbow:

Local injections of steroids and/or analgesics

Bracing over the flexor pronator and a wrist splint

If symptoms of Golfer’s elbow do not improve with conservative treatment, surgery may be necessary. This includes procedures to the medial epicondylitis, the medial conjoint tendon and ulnar nerve to repair the damaged tendon and release or partially debride the origin of the flexor muscle. In some cases, the medial conjoint tendon is fully excised. Surgery can be performed via open approach or arthroscopy. Return to sport may take longer, up to 6 months after surgery.

Following surgery a splint is worn for two weeks with the elbow kept at 90º before
commencing active physiotherapy. Physical exercise is critical for the treatment of Golfer’s elbow, whether operated or not, and offers a variety of
approaches:

Treatment of any related injuries (neck, shoulder or upper back)

Golfer's elbow can be prevented with the introduction of simple measures
when practicing sport or other physical activities. They include:

Stretching exercises before and after golfing/other sports

Warm up before sport

Use of taping, straps to minimise forearm muscle strain